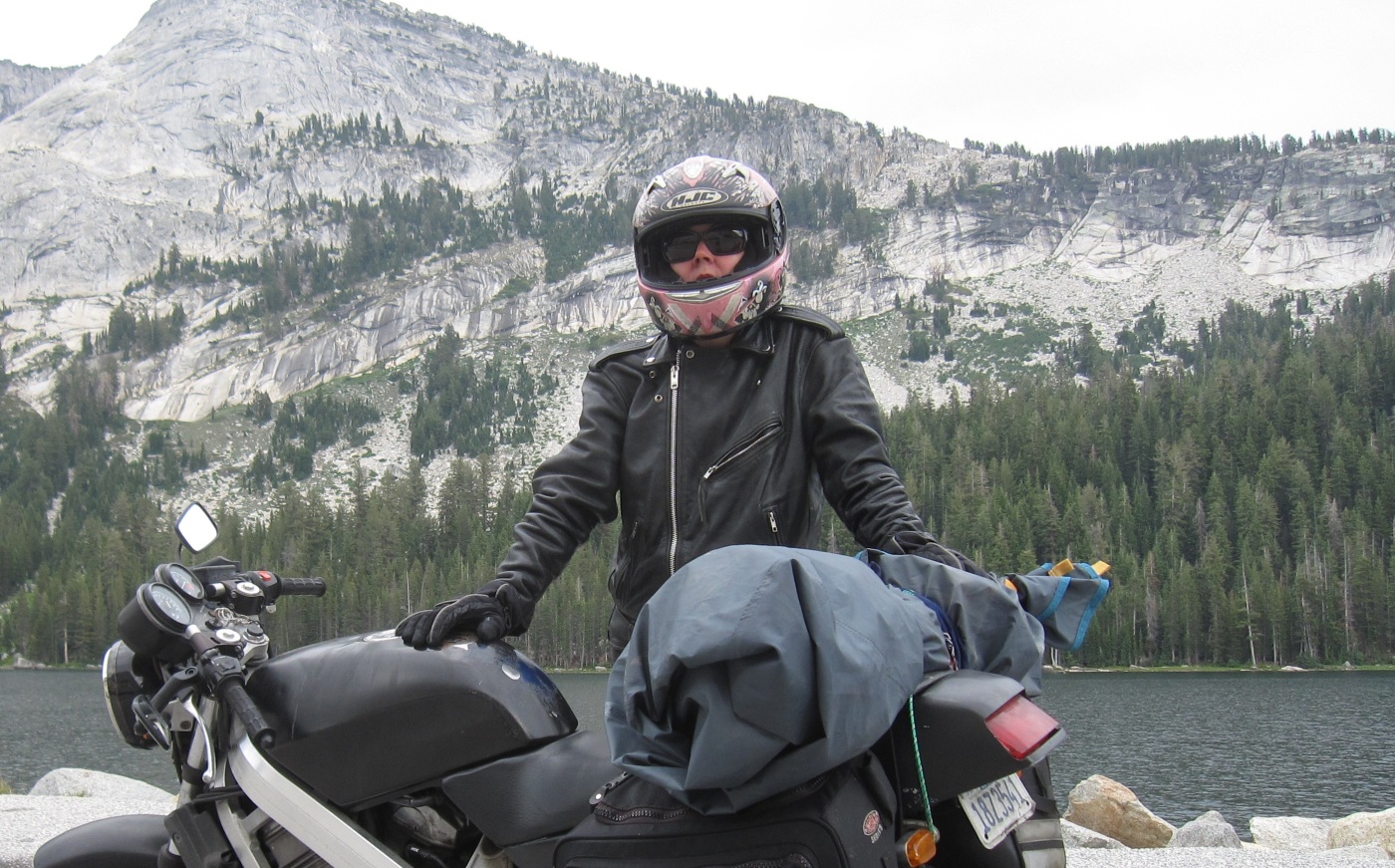 Source: Stop Fucking Touching My Helmet! And Other Motorcycle Tales

Stop Fucking Touching My Helmet! And Other Motorcycle Tales

In other news, I’ve got a new job! And you won’t believe what it is….motorcycle messengering!! No shit! I’m getting paid to ride my bike around! It’s pretty awesome, as I’m sure y’all can imagine.

Thus, I have LOTS of stuff to say about riding, shit that’s been building up lo these many months, but the most pressing is that I think I may have identified a new trend in modern douchebaggery: Douchebags fucking touching my helmet. 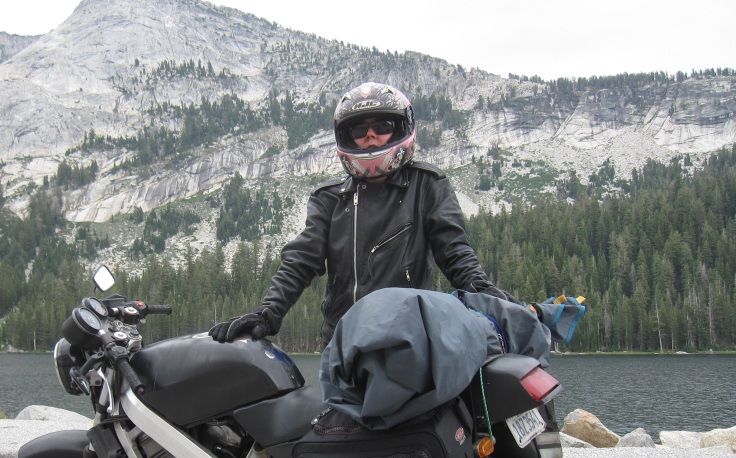 As you can see, my helmet is pink. Its pinkness is often an important feature in my riding tales, because it allows other drivers to identify me as female. In fact, there is absolutely no doubt in my mind that my perceived femaleness makes a difference in how most drivers treat me–especially male drivers.

Now, I think most motorcyclists, regardless of actual gender, will agree that a surprising majority of male drivers have, um, let’s say, dick issues with motorcyclists, regardless of perceived gender. Dudes get pissed at you for passing them while lanesplitting…or passing them period…or for not driving fast enough (“You’re supposed to be going FAST, asshole, you’re on a MOTORCYCLE!” you can hear them saying as they then whiz past you much too close to show they are irritated that you think you are badass but obviously are NOT badass because you are going TOO SLOW). The fact that they can tell I’m a chick simply adds another layer of competitive stupidity (“Who does this bitch think she is, coming around me to the front of the lane?” I know they are saying to themselves).

I was originally attracted to the pink helmets because I thought they were ridiculous and thought it kinda took sheer balls to go riding in one. But I ALSO thought the color (along with the ridiculousness of the color) would make me more visible in traffic. In fact, I was disappointed that they didn’t make ’em in pink day-glo. And I think I was right, the helmet is fairly conspicuous. So, it does its job there. What I didn’t expect, but started to get off on, were the obvious, undeniable reactions I experienced as I began riding as an announced female. So, the main problem with douchebag cagers is that I have a vagina. I can’t say whether the helmet’s pinkness and/or ridiculousness irritate or antagonize in addition to the vagina problem, but the issues are practically collapsed, since the pink is kinda how they find out about (or at least confirm) my chickness, anyways.

Maybe drivers can tell I’m a chick in other ways, but the helmet seems to be the dead giveaway. And I will probably never know what riding would be like with a gender-neutral helmet, because I will always have a pink helmet. I will cling to this partickler helmet as long as is humanly possible, since it is the coolest design they made and they don’t make it anymore. And when I can no longer jimmyrig this one, the new one I buy will also be pink…because my first intuition about it was correct: It takes sheer balls to ride around in a pink helmet.

SO. Now that you’ve gotten some background about me and my helmet, I can reveal that I am NOT SURE whether the fact that my helmet is pink has ANYTHING to do with douchebags touching it. But here are the incidents that I have been given permission, by a panel of experts (i.e., my friends Deb and Riley), to call a trend.

After work one day, I stopped into one of my favorite Oakland bars, historic Heinhold’s First and Last Chance. It was just an afterwork beer on a weekday and it was fairly late, like, maybe 10:30pm (Heinhold’s usually closes around midnight). I got to the bar and sat in the seat right next to the door, put my helmet on the bar next to me, took out my book and began unobtrusively reading. I didn’t talk to anyone, I didn’t make a bunch of noise. I came in, ordered my beer, sat and started reading.

As the bar was relatively empty and quiet, I was privy to the conversation at the other end of the bar, which was between a tourist, middle-aged Russian couple and some younger dude who was much drunker and sounded like he was only pretending to be in venture capital. I say this because he spoke like a less articulate Spicoli. 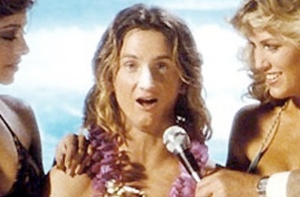 Nonetheless, it was difficult for me to decide who was more annoying because the dude half of the Russian couple was waxing know-it-all about Bay Area finance and being a condescending prick to the Surfer VC Dumbass. Then, when the Surfer VC Dumbass left, the Russians began to make out and stroke each other as if they were in some sort of commercial for reignited passion via gifted diamond rings (I could see this through the mirror above the back bar and also the smacking, I could hear the smacking). They occasionally pulled themselves apart to chat with the bartender, with the dude acting fairly imperious. As is so often the case with those who engage in Disgusting Public Displays of Affection, they seemed to imagine that the few people in the bar were enraptured by and most likely envious of them. The reader will understand that I quite naturally kept my nose in my book and tried to shield myself behind my helmet and felt rather safe as I had the entire length of the bar on my side.

Thus, it was with ABSOLUTE SHOCK that I experienced what happened next, which to understand, you will need to look at the diagram below. The image shows the bar as it was many years ago, but it’s essentially still the same and functions totally for the purposes of this story. 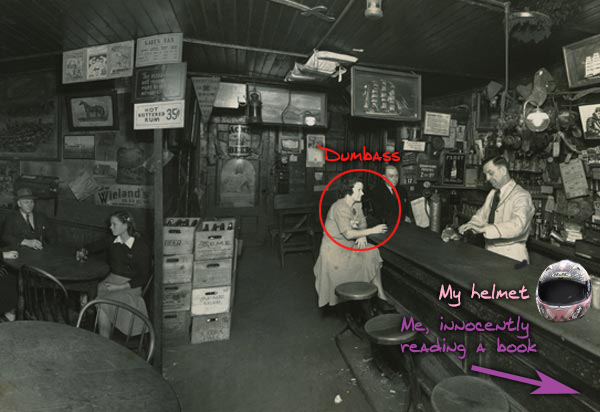 During a lull in snogging and conversation, Dumbass Russian reaches ALL THE FUCK THE WAY down the bar and PATS MY HELMET. He didn’t actually get up, he LEANED. And had to STRETCH his arm out. To pat my helmet. Like how you’d pat a dog on the head. Proprietarily, like three or four times.(!!!)

Honestly, I’m not even totally sure what happened next, like getting hit by a car, it was as though it had happened underwater. I was in total shock. Phil, the bartender, just looked at me warily. His eyes were wide and, though he seemed to be a little worried about how I was going to react, it was clear he understood the total WRONGNESS of the act. I think I must have looked confused because he said to Dumbass Russian, “Dude, that’s so not cool. You shouldn’t touch other people’s stuff.”

So what did Dumbass Russian dude do? HE PATTED IT AGAIN!!!!! I am fairly sure I said nothing the entire time and just stared at Phil like a deer in headlights. All I wanted to do was pick up the helmet and bash his brains in with it. Which I obviously could not do. So I just looked at Phil for guidance. I’m sure I made some movements with my hands, indicating that I was trying not to use them how I wanted to.

In the end, the dude did it like FOUR TIMES. And he said things like “I’m not hurting it!” (with this he patted it HARDER!!!!!!!!!!!!!!) and then said some other bullshit about, like, Americans and their personal space issues or some such shit. I feel like I remember Phil kinda latching on to the “personal space” thing and saying something like “Yeah, well, you’re in America, so maybe you should try to respect that.” Or something. Each time the dude did it, it was MORE slimy and condescending.

I know Phil tried to get him to stop, but Dumbass Russian was like, adamant that he wasn’t going to stop WHEN Phil told him to, because then it would appear as though he was allowing himself to be told what to do, so he did it once or twice after Phil told him to stop again, just for good measure and then finally straightened himself back up (he had been leaning ALL THE WAY DOWN THE BAR THE WHOLE TIME TO DO THIS) and continued snogging with his not-that-hot lady, who was thinking what? during this exchange? I mean WHAT THE FUCK???!?!?!?!?! Did they go back to the hotel and she was turned on by his little display of dominance? Like, “It was so sexy when you touched that girl’s helmet! I LOVE when you touch other people’s property for no reason!”

And that’s the thing–it’s not JUST someone else’s property, it’s their HELMET. I mean, where I’m from, you don’t touch people’s fucking bikes or their bike paraphenalia. And I think we can ALL agree that were I a dude, especially a hairy one, the helmet would NOT HAVE BEEN TOUCHED. So that leaves that I’m a chick and THAT is why my helmet got patted. So then what’s that? If it had been a backpack, would he have LEANED ALL THE WAY DOWN THE BAR to pat it?

So I can only deduce that this guy had some FUCKING DICK PROBLEM with the fact that I ride. It was VERY IMPORTANT that he LET ME KNOW that he was IN NO WAY having DICK ISSUES with the fact that I ride. OR. HE projected ON TO ME that I was sitting there, with my asshole helmet, thinking I was TOO COOL FOR SCHOOL with my helmet and he was going to LET ME KNOW that HE was NOT INTIMIDATED. Which isn’t much different than just having a dick problem with it regardless of what “vibe” he may or may not have imagined I was emanating.

And let’s briefly mention, because I think it deserves it, THE FUCKING DISTANCE. This guy CONTORTED HIMSELF, essentially, to let me know he wasn’t in any way intimidated by me? Wouldn’t the BEST way to have let me know that have been to JUST IGNORE ME?!?!?!?!?

So you see, if the helmet creates this kind of DICK SHIT while I’m sitting in a bar, reading a book, you can only imagine what the fuck dudes think when I pass them on the street. Fucking bloody murder.

You will have to tune in next time for Incident #2 as this is too long already and I’ve become irritated reliving the whole experience. ARRRRRRGH. WHAT A DOUCHEBAG!!!!