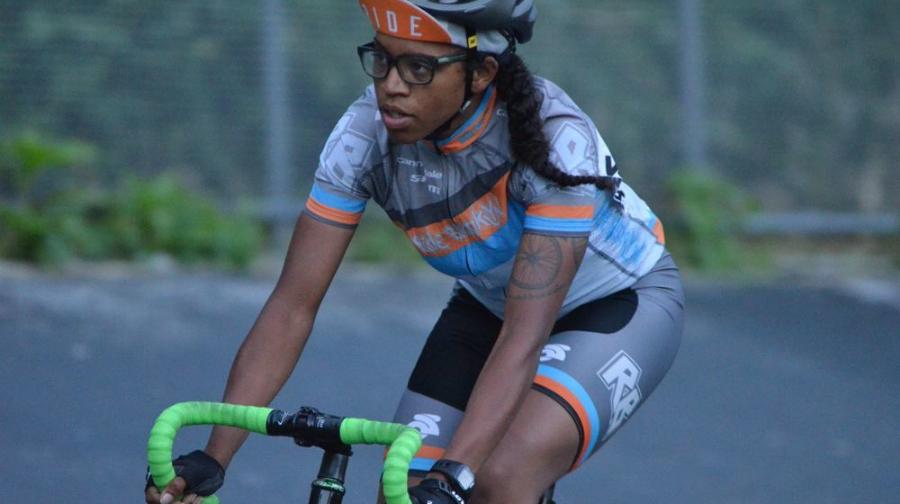 This story by Ayesha McGowan first appeared in the Fall 2015 issue of the League’s magazine, American Bicyclist.

A few years ago I was with a group of friends who decided it would be a great idea to participate in an alleycat race run by some local New York City messengers.

I spent some time watching alleycats on YouTube, and I had a pretty good idea that, in order to win, I’d have to make some dicey decisions to save time. Weaving through traffic, and narrowly avoiding pedestrians are all a part of the game. And I was ready to play.

After a few years of that type of adrenaline, I grew a little older and a lot wiser. I also became a very active bicycle advocate. The idea of running yellow lights and nearly mowing down pedestrians wasn’t my idea of fun anymore. So I sought a safer way to go fast.

The transition happened pretty much simultaneously. My last alleycat was Monster track 2014 and my first road race happened about a month later. I wasn’t really paying attention to the clinic description. I also made the mistake of skipping the pre-clinic talk hosted a few nights earlier. I was under the impression that someone would talk to us, and we’d do a few drills before we went home. I was so wrong.

Sure, someone did talk to us, but afterwards, they put us in a race with mentors — and told us to go for it. I was on a borrowed bike that was too small for me. I didn’t really know what was going on, but I knew I was supposed to stay toward the front and sprint at the end. I did both and ended in fifth place. I couldn’t think of a time I ever had so much fun not winning something before.

Funny enough, I spent so much time on a track bike that I just assumed I would become a track racer. I never imagined I would turn into a roadie, but lo and behold here I am. It took me a few weeks to get a bike of my own, and by the time that happened the initial doubt and anxiety from before my first race had reemerged.

Lucky for me, there was a race right around the corner from the house where I grew up in Piscataway, New Jersey. It was comforting to be “at home,” but it wasn’t a great race for me. The leaders were lapping the field — with me in it — and I was pulled before I could finish. Regardless of my lousy result, I had so much fun I couldn’t wait to do it again. The anxiety was gone!

Once I was less concerned about how terrified I was, I began to notice that the women’s peloton didn’t contain very many brown faces. In New York City there are brown faces throughout the men’s fields, so I was pretty surprised to see this wasn’t also the case for the women.

At first, I didn’t think too much of it but as I attended more and more races, I started to consider it a problem. Not because bike racing necessarily needs more brown lady faces, but because I am positive that more brown ladies would really enjoy racing! I felt there was a whole group of people who were missing out on the fun, and that was just silly.

I searched the internet and polled forums of Black cyclists hoping to find a forerunner in my movement. It was 2014, so I was positive there must be an African-American female in the pro-peloton at some point in history. There was not. There is not.

By the end of my season, I made the decision to make a significant difference. Since I’ve always been a fan of advocacy by example I decided to “be the change.” The more African-American female representation we see in the peloton, the more African American females will identify themselves a potential bike racers. This starts with just getting out there and letting ourselves be known. Grassroots groups like Black Girls Do Bike are carrying the torch to inspire a love of cycling in general.

I didn’t start my bike journey in a race. I started it by commuting, and enjoying myself on a bicycle. Just like when I was a kid. This is where we start. Planting seeds in these little groups, letting friends know when there are racing clinics and offering to escort them there. Give them pointers, offer them support and, most importantly, letting them know they are totally capable.

I really hope that in the years to come, I see more brown faces in every race. I would love to be the first African-American female professional road cyclist, but if someone else beats me to it then I will know the change I hoped to see in women’s racing is coming sooner than I expected.

No matter what happens, I am beyond excited by the endless amount of possibilities.