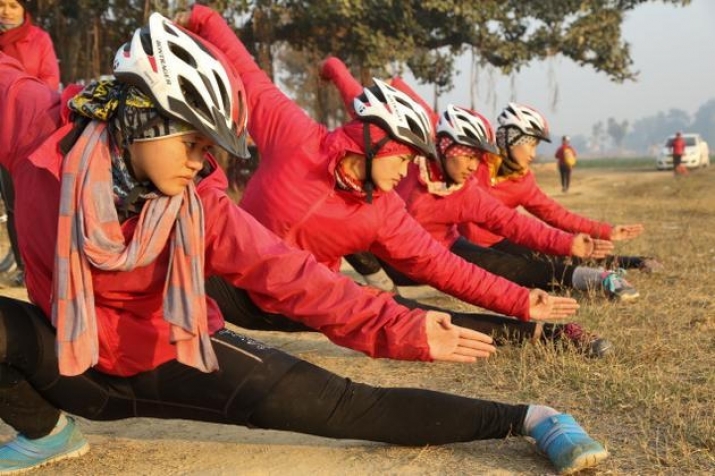 “Kung fu nuns” of the Drukpa Kagyu lineage are cycling across northern India to raise awareness about environmental protection and women’s empowerment. From thehindubusinessline.com

Some 250 Buddhist nuns of the Drukpa Kagyu lineage of Tibetan Buddhism have embarked on an ambitious 2,200-km (1,367-mile) yatra, or pilgrimage, by bicycle, cycling from Kathmandu to New Delhi through the northern Indian states of Bihar and Uttar Pradesh with the aim of raising awareness about women’s empowerment and environmental conservation.

The famed “kung fu nuns” hail from Druk Gawa Khilwa Nunnery at Druk Amitabha Mountain in the hills of Kathmandu and Naro Photang Nunnery on the outskirts of Leh, Ladakh, and are accompanied by fellow monastics from West Bengal and Himachal Pradesh. Divided into 10 teams, the intrepid group has so far covered about 2,000 km on behalf of Live to Love, an international network of non-profit organizations. They are under the leadership of His Holiness the Gyalwang Drukpa, the spiritual head of the Drukpa Kagyu order and founder of Live to Love, who is also responsible for organizing the “Eco Pad Yatra”—a similar journey on foot.

“The cycle yatra points to the independent and collective will power of women and their equivalence with men; the use of a vehicle that is environment-friendly sends a strong message of conservation and environment friendliness,” said the Gyalwang Drukpa. An active environmentalist and proponent of gender equality, he added that the pilgrimage was also significant as “it reminds us all of the immense strength that women embody and their will power. It is also a reminder that women play a huge role in conservation and environment consciousness and that they can be the biggest influencer in this campaign.” (The Northlines)

His Holiness observed that the group aimed to pass on its messages to the communities it encountered by acting as an example: “When we set up camp, we not only do not litter, but we also clean up other people’s rubbish and leave the place better than before.” (BLink) 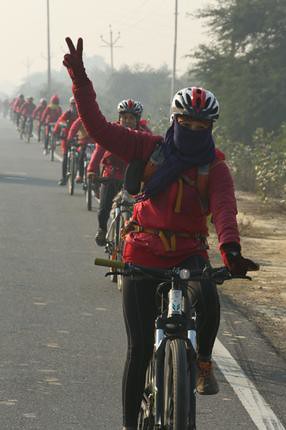 The nuns began their yatra on 18 November
last year and plan to reach New Delhi on 9
January. From thehindubusinessline.com

From the Indian capital, the nuns will cycle on to the Buddha’s birthplace of Lumbini, Nepal, before dispersing to their respective nunneries. The nuns began their expedition on 18 November last year and plan to reach New Delhi on 9 January.

“The idea is to show by example that if 250 women can cycle thousands of kilometres, all the way from Kathmandu, through tough terrains, then people living in the cities here can walk a bit more and cycle a bit more,” said His Eminence Gyalwa Dokhampa, popularly known as Khamtrul Rinpoche, the second most senior leader of the order, who accompanied the nuns. (BLink)

Speaking on the group’s experiences during the tour, the Gyalwang Drukpa said, “People of various villages and towns provided us milk, vegetables, and eatables for free of cost of cyclists and even arranged shelters for night stay.” (The Times of India)

“Next year the group will ride 5,000 km for the similar cause,” he added. (The Times of India)

“We wanted to introduce gender equality in our order, so threw open our doors to women in 1992,” said Khamtrul Rinpoche. Rinpoche observed that it was the Gyalwang Drukpa’s idea to teach them kung fu, not only as a means of self-defense but also to instill self confidence and focus. “Kung fu is close to meditation,” he added. (BLink)

Founded in Tibet by Tsangpa Gyare Yeshi Dorje (1161–1211), the first Gyalwang Drukpa, the Drukpa lineage is a branch of the Kagyu school of Tibetan Buddhism. Along with the Sakya and Gelug, the Kagyu tradition is classified as one of the Sarma or “New Transmission” schools. The Drukpa lineage is also the dominant school of Buddhism and the state religion in Bhutan.